Surface By Microsoft Is Not Your Father’s Laptop 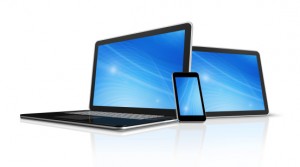 Microsoft Surface is a laptop with the ability to become a tablet….Or is it a tablet with the ability to become a laptop?  The building design of putting the core mechanics behind the screen vs. under the keyboard shows that Microsoft “gets it” when it comes to progressing into the next generation of computers.  The Surface has many, many features that separate it from the bulky, heavy, limited-function laptop that your dad first owned! From the VaporMg casing, which makes it three times lighter than the average laptop, to the fact that it uses a real processor, the Surface combines ease of use with running serious desktop applications.  While this is not the first of its kind, it seems to be the best so far.  HP introduced the EliteBook Revolve and Lenovo showcased the ThinkPad Helix but Microsoft has proved to be the frontrunner to date.  Brook Crothers of CNET wrote a review on why he believes other device makers should sit up and take notice.  If Microsoft can stay ahead of the crowd, we could be seeing a new generation of PCs being introduced in the near future.

Remember, if you have a short term event, or project, that needs a light weight, high powered tablet, consider a Microsoft Surface Rental From Rentacomputer.com