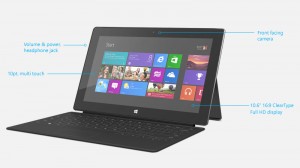 Microsoft has announced February 9, 2013 as the release date for their Surface with the Windows 8 Pro operating system.

The new system is now 13.5 mm in thickness and weighs 2 lbs.  In comparison, the Windows RT is 9.3 mm in thickness while weighing in at 1.5 lbs. The USB port is now a 3.0 versus the 2.0 and the HD video out port has been replaced with a Mini DisplayPort. The MiniDisplayPort is an open source port and allows for higher resolutions using smaller connections.

I do like the changes Microsoft implemented in the Surface Windows 8 Pro, I’m just not certain the $400 price increase is justified.

Should you be interested in a short term Microsoft Surface Pro Rental, for a project or event, a Tech Travel Agent with Rentacomputer.com is eager to help.