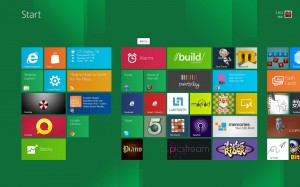 Windows 8 is the biggest new operating system development to come out of Microsoft in recent years, mainly due to its focus on touchscreen functionality and all the new and enhanced features it was bringing to the table. While Windows 8 is still trying to establish a foothold with the die hard Windows PC users, it is doing extremely well among the tablet and mobile users of the day.

Windows 8 features a completely redesigned user interface based on Microsoft’s Metro design. This new layout features a new tile-based Start screen, reminiscent to the one found on the Windows Phone OS. In addition to that, this layout also features a customizable collection of tiles that link to various apps, games, settings and desktop programs.

The Home Screen has also been given a vertical toolbar, along with a charms bar, which will feature functions like search, sharing, settings and a start button. Windows 8 will also allow you to sign into your computer using your Microsoft account or Windows ID. This allows a user’s profile and settings to be accessible from any device running Windows 8, allowing you to sync all of your data to the cloud and take it with you anywhere you go.

After using this operating system firsthand, I will say that it is not for everybody and that it does take some getting used to. But that is what makes renting a device with Windows 8 the smarter decision. If you try it out and you don’t like it then you just send your device back at the end of your rental period and go back to using your old OS, it’s as simple as that!