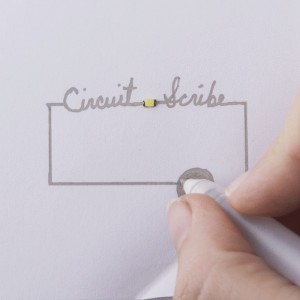 In the past year alone we have seen some crazy things come to fruition in the tech world. While some might arguably not be as practical as some other new devices, there have still been quite a few of them. Ranging from completely expected and practical, such as new mobile devices and the new Playstation 4, to the not-as-practical, more novelty, gadgets such as the 3Doodler pen and the “Ring-Clock”. All these new products have seen their fair share of financial backing via online campaigns, but very rarely do we see an independent product come out that could be very beneficial and ,more so, practical to its users. Electroninks Inc. may have finally given us computer geeks and tinkerers alike something to really use with complete ease. They have just introduced the new Circuit Scribe ballpoint pen.

The company, based out of the University of Illinois research lab, has developed this pen to hold a conductive silver ink that can literally “draw” circuit boards. As fast as you can think them up and as fast as you can draw them, this pen now gives researchers and development teams the ability to test out prototypes and mock-ups on a different and quicker scale. It also helps that it makes things a bit cheaper as well due to the fact that there are no boards, wires, or soldering involved when working with the pen. If you have the time, imagination, and LED light and a coin battery, you can begin creating to your hearts content.

There is a selection of different parts and components that can come with the Circuit Scribe pen that range in their complexity as well. It can range anywhere from small LED lights and buzzers and go to the other end of the spectrum with potentiometers and photo sensors. This will allow for even most advanced designs to be “drawn up”. Everything from a fully working touchpad for the more advanced tinkerers, to simplistic switches for those who may be just starting to use the pen and learn about electronics and circuitry. That is another aspect of the pen that the company wishes to institute; educating a younger generation and even the current and older generations about circuits and how electronics work. The pen and its components are designed for younger novices just learning and the more experienced veterans of the trade.

With their Kickstarter campaign already very well beyond it’s goal $85,000 and not even a full week into launch, it is not hard to see that many others find this new “tech pen” to be something that could become a huge asset in the hands of tech development teams across the board, and even become beneficial in the classroom to further the education about tech.

It is all about going back to the basics, and with this pen, it doesn’t get more “back-to-basics” than actually DRAWING your circuits and prototypes. The amount of money that could be saved, along with the amount of time that could be spared from utilizing such a simplistic tool as a pen with conductive ink could mean faster turn around time for many tech companies such as Apple, Samsung, and Android. With something as practical as this in development now, many of the other independent inventors out there should be asking themselves, “Is my product going to be marketable and practical?” Electroninks Inc. has definitely nailed it with their Circuit Scribe. Inventors take note! Businesses take a number! This is something that could become invaluable to many a company an tech tinkerer alike.