New Video From Samsung Shows Us A New Interactive World 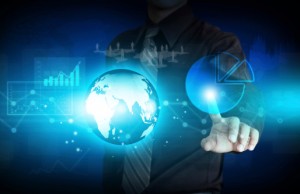 Technology is really taking off in ways that we never expected in just the past few years. One company that is spearheading this new sci-fi technology is Samsung. With devices like the Galaxy Gear smartwatch and their soon to be announced Galaxy Glass, we can tell that their passion for tech is fueling their experimentation and their visions are taking us to places that we had previously only dreamed of. Now, a new video has been released during their recent Analyst Day in Korea.

The video shows a world where every surface you could think of; windows, walls, tables, and anything else can become an interactive screen of some sort. One of the first devices they show us is a coffee cup that has a fingerprint scanner. It displays the users health information on the cups surface with diagrams and a heart monitor. Next, there is a screen shown that takes up an entire wall that it totally interactive like a tablet screen. It’s literally like it came straight from an Iron Man movie.

One of the most inspirational parts of the video shows a teacher in a classroom. She is using a transparent, interactive blackboard to teach her students and it even allows them to play and interact with students in different classrooms in completely different locations. Something like that would literally change everything about how the future of America, and the future of the world would be educated. It would change the way children viewed education and make them eager to learn. The concept in this section of the video in particular has the potential to literally change the entire world forever.

The video goes on to show an interactive car display that appears on a window where you can change different things like the temperature inside the car, an interactive cutting board that displays the nutritional value of the food you’re preparing and different recipes, and so much more. You’ll have to watch the video yourself to soak it all in.

For A Short Term Samsung Technology Rental For Your Next Event Call Rentacomputer.com At 800-736-8772

This type of technology would be thought of as impossible just a few years ago. But lets face it, we take technology and how far it has come for granted every single day. Facetime and Skype on smartphones isn’t even a big deal to us anymore, but if you think about it, that technology was on Star-Trek and the world thought it was the most amazing thing they had ever seen, and everyone just knew that it would never happen. Today, we have smartglasses that turn the entire world that we live in into an interactive space with unlimited possibilities. There is literally not one thing in this entire video that is impossible at this point, and I think that Samsung is just the company to make it happen. I also think that this video is showing us a glimpse of amazing things to come. Check it out!