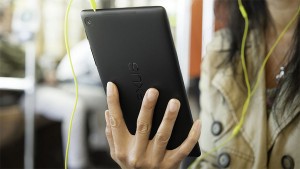 Rumors are starting to seep out that Google is already fired up and working on their next Nexus tablet. Coming after the current flagship Nexus 7 2.0, it is expected that the new model will be the Nexus 8. The Nexus 7 2.0 is less than a year old, it came out in July of last year. It was a product of the relationship between Google and Asus and got a ton of positive reviews thanks to its thinner design, its powerful enhancements over the Nexus 7, and its 2.3 million pixel HD display.

Since the one year mark from the last Nexus release is coming up, it is about time to at least start hearing some things about Google’s next big plans for their flagship line of tablets. Word has it that this time around, the tablet will be a little bit bigger. It is supposed to be somewhere around 8 or 9 inches to be able to compete with the different Apple products and the LG G Pad. It is also been said that Asus will be teaming up with Google again this time to bring us the next Nexus tablet. Other companies rumored to be involved are LG, who helped make the Nexus smartphone, and maybe even HTC. Some reports even suggest that Asus passed the opportunity on the HTC and are skipping out on the project all together.

The new Nexus tablet will almost certainly come with the new version of Android, which is being called Android 5.0 at the moment. Generally new Android releases happen at Google I/O which is being held on June 25th and 26th in San Francisco, but if that doesn’t happen then it will likely be released some time between July and September with the launch of this new tablet. Production is said to start this summer, so that means it could be at any moment. We’ll have to see. But either way, it is going to be an exciting year for Android users.

For Your Next Apple Or Andriod Tablet Rental Visit www.RentOurTablets.com Today or Call 888-736-8301