Turn Your Audience’s iOS And Android Devices Into Wireless Microphones 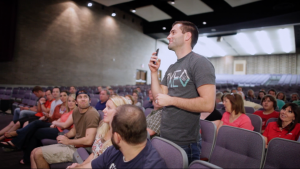 The concept of Crowd Mics came while Sean and I (co-founder and brother) were in a meeting together. The interactive presenter asked for a lot of questions and comments from the audience but Sean and I couldn’t hear the responses. Sean was distracted and was holding his iPhone when it hit him, “I can FaceTime someone across the world and see and hear them fine, but I can’t hear that person in the room with me. Why can’t I use my phone as a wireless microphone?”. I have worked in live events for years and thought of a way it could be done. We researched for months thinking it must exist, and it didn’t. So we decided to be the ones to bring this “mic for the crowd” to live events.

So how does it work? Everyone downloads the free Crowd Mics app and connects to the same wireless router, which can be via a venue’s Wi-Fi or a stand-alone wireless router. Crowd Mics doesn’t require an Internet connection because it only uses the router to push data back and forth.The presenter on stage plugs an iOS or Android device into the room’s sound system and creates a name and access code for the event in the Crowd Mics app. Audience members download the app and enter the code to join the event. When they want to ask a question or make a comment, they tap a “Request to Talk” button on their devices, and the presenter will see a list of people who want to talk in the order they requested. The presenter can enable an individual microphone, mute a microphone, or put the system in “open mic” mode so anyone can comment. Audience members can also submit text comments to the presenter through the Crowd Mics app. The presenter can also use the basic polling functions.

We believe that when the technology gets out of the way, true interaction and participation can occur. Running wireless mics around the room or putting mics on stands distracts from act of hearing the audience. The ultimate distraction is simply not being able to hear the interaction at all. By giving everyone a voice (audio or text), the focus will be less on the mic and more on the discussion.
When you see something interesting you expect to pull out your phone and take a picture. You don’t think as much about the device or the act of taking the picture. You just take it. In the near future we want anyone attending an event to assume they can take out their phone and use it as a microphone in the room. The best microphone you have is the one in your pocket.

Crowd Mics is free for audience members. The event organizer, presenter, or venue pays for access to the system based on the size of the crowd. It’s free for 20 participants and pricing can be found at crowdmics.com.