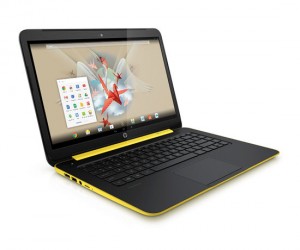 There have been many laptops coming out lately that are loaded with the Google Chrome operating system. Chrome has actually become a pretty popular operating system in general even though it seemed pretty odd at first. If Chrome can be the the main operating system for a computer, why couldn’t Android? Well, it seems like it can. Aimed toward the Android fans who want to take their Android experience to the next level, here is the new SlateBook 14.

The HP SlateBook 14 laptop features a 14-inch touchscreen with 1080p resolution, an Nvidia Tegra 4 processor and a vibrant yellow and black design. This new laptop will be available to the public on August 6th and has a price tag of $399.

The new laptop is pretty similar to the smaller HP SlateBook x2. They both use the Nvidia Tegra 4 processor, and they both have 2GB of RAM. The SlateBook 14 only has 64GB of storage, but unlike a lot of laptops, it actually has an SD card slot so that you can add some extra space without carting around a big goofy external hard drive. That would kind of take away from the convenience of a laptop. It also has two USB ports, an HDMI output, and a microSIM card slot. It only weighs 3.71 pounds and it is only 0.6 inches thick, so it is on the lighter side when compared to most 14-inch laptops.

This Android based laptop is full sized, and of course has a full sized island style keyboard. It also has a pretty big touchpad below it with integrated mouse buttons as well. The top row of keys gives you quick access to different settings like brightness, volume, search, and Airplane mode. It also has a pretty big speaker grill compared to most laptops, so it may get really loud and has a pretty good set of speakers as well. Only time will tell with that one.

HP claims that the battery life on the SlateBook 14 will be better than most of the Chromebooks and even most of the usual Windows laptops on the market today. It is supposed to get up to 9.25 hours of use on a full charge. That is pretty good, especially in the price range.

Having Android on a full sized laptop seems interesting, but many people are wondering if the operating system is completely ready for the big screen. This could mean that some people will be scared away from it. But then again, Chromebooks had much success from the start, so it could also go the other way and people might start moving from Chromebooks to Android-based machines. Some of the other bigger devices that run Android, like all-in-ones and bigger tablets, can sometimes be a little bit awkward. But, Google is no fool. There will surely be some changes and some optimizing to be seen with this. Hopefully there will be some big news on some new optimization of the operating system at Google I/O later this month.