You Want A Cheap iMac? You Got It! 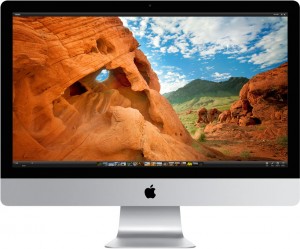 Let’s just go ahead and get it all out on the table right now. Electronics are expensive, and we all know that. Every new device that comes out seems to have our wallets trembling and our bank accounts looking slimmer. It’s okay to treat ourselves every once in a while, I won’t lie. I’ve been known to buy myself a few nice things every once in a while. The only issue is that it can add up and when you’re dealing with a brand, or brands, that are known for amazing technology, it can become increasingly difficult to justify a purchase. Maybe you need a new computer, but you better be ready to fork out some money, especially if it’s an Apple computer. While this still may be the case mostly, Apple happened to throw us a bone.

Apple had just released a brand new iMac for those of us who may be on a budget.

For the consistent Apple shoppers, you may have noticed that there was a message up on the Apple store online yesterday. “We’ll be back” it read. Well this happens to be a tell tale sign for Apple. When you see this message, you can go ahead place a bet that they’re about to be releasing some type of new hardware online. Now there are have been a few things that Apple heads have been looking forward to for quite some time. Things that they may have been expecting. No, we didn’t get the new MacBook Air with Retina Display, but we did get our very own $1,100 21.5 inch iMac computer. I personally think that the later is a better option anyway. You might not be able to even tell the difference, display wise, simply due to the size of the screen.

The new, cheaper iMac is definitely budget, mind you. Inside this puppy, you’ll find a 1.4GHz CPU and a smaller storage deck of only 500 GB (ONLY 500… lol). The GPU was also downgraded to an Intel HD Graphics 5000 GPU. For only $200 more, you can get some better hardware. The $1,300 model comes with a 2.7 GHz processor and an Intel Iris Pro GPU. It also comes with an updated storage deck as opposed to the half terabyte.

I personally don’t feel that the lower graphics card and 500 GB of storage are that big of set back. Even though this is a budget buy, I still think that the hardware isn’t all that bad. The price might not constitute the lower grade hardware, but you have to remember that you’re paying for the brand as well.

A new iMac for $1,100 and $1,300 isn’t bad at all I’d say. Their timing is impeccable by the way. Amazon releases their new smartphone today. I find it to be a bit more than coincidence that the new iMac releases at the same time. Apple already has the mobile consumer technology market locked down. I don’t see why they would need to pull attention away from Amazon’s new phone, to be honest with you. Maybe it’s just a cheap way to draw attention, or maybe they are just giving us a little taste of whats to come. They know we want some new hardware for their Air lineup. Perhaps this is just their way of holding us off until that point.

Either way, here’s to having a new cheap iMac, and hoping that they put some good, requested technology up on their store!