The iWatch Release Has Been Pushed Back, But Do You Really Care? 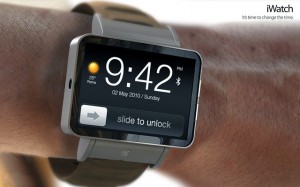 Everywhere you look, there just seems to be more and more news about smartwatches. I’ve done a few stories on these devices already, and I’m not sure how I feel about them. The idea of wearable technology just seems like a double-edged sword to me. I love the idea that I can have a very small computer with me at all times, but the fact that I would wearing it just seems a bit impractical to me at the same time. People can get behind the new trend all they want, but I’ve still yet to see more than one person in my life legitimately owning a smartwatch. That hasn’t kept Apple from continuing the production of the new device however.

Lets all just be real with ourselves here for second. We all know that Apple is the biggest tech company on the consumer market. Everywhere you turn, there is some girl texting her friends on her iPhone, or a businessman/woman working on their iPad. the iWatch has been rumored continuously, but wasn’t even talked about at this years WWDC. This did raise some concerns for the people interested in the new device. “Is it still coming out?”, “When will we see it?”, “What are the features on it?”. The list of questions goes on, but Apple might be playing it safe an just be watching the competition fail. They’re learning from the mistakes of their competitors and essentially making sure that their product doesn’t flop like the Galaxy Gear did…

What Do We Know About The Device So Far?

Honestly, not too much. Everything that we do know so far is complete speculation, so only so much can be taken with any amount of merit. We know that the device IS coming out. How? Well because of people like Ming-Chi Kuo. This KGI specialist is basically the biggest lead that any of us have on the new device and understanding what is coming. So far, we are EXPECTED to see a flexible AMOLED display. The display would be a sapphire glass covering, so making that flexible should be interesting. Supposedly, the production has been slowed down because of the circuitry and being able to shrink it down into the small-sized smartwatch. The company is also in the process of making the iOS function properly on a smaller and differently designed screen. The overall “flexibility” of this screen should be taken with a grain of salt however. Remember the LG Flex and how “flexible” that was?

What Does This Mean For You?

Well this all depends on if you’re into the wearable tech craze. I personally have no real interest in it. That being said, I and everyone else in the world will be immediately interested in the device when it drops. Why? Because it’s Apple. Everyone is going to be interested in seeing if Apple will be the company actually pull off the smartwatch. Usually anything with the “i” prefix tends to turn into gold, but that doesn’t mean that the iWatch will. If you love wearables, then stay tuned because we should be seeing the new iWatch drop sometime in November.

Apple is going to get a following for their new product and that’s just a fact. It’s the same reason why almost every has an iPhone; to make a fashion statement. Now don’t get me wrong. I think that Apple makes great products. That being said, every other smartwatch has failed. We will find out whether or not Apple will be able to pull off a miracle come November.

Technology Rentals Are Available Nationwide From Rentacomputer.com Today At 800-736-8772