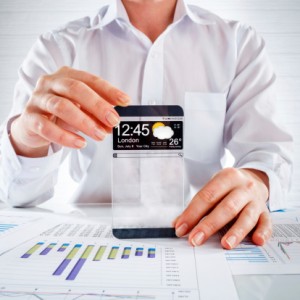 When Samsung put out the Galaxy round, everyone thought it was really cool but pretty odd. They are now about to take things to the next level. One of the Korean suppliers for Samsung parts has said that the company has started testing three-sided displays that are going to be used on new smartphones.

There have been plenty of rumors about this type of display making it’s way to the smartphone market. Originally, everyone thought that Apple was going to use a three-sided display for the upcoming iPhone 6. It turns out that Samsung is going to be the first company to actually use the technology and reports have claimed that a device using this could be going into production as soon as the end of this year.

A while ago, the executive manager for Samsung’s Wireless Business Division Kim Hyeon mentioned a new flagship model during a conference call for Samsung’s second quarter earnings. Hyeon was not able to say anything specific about the device except that it was going to be an innovative, attractive, large screened flagship model using cutting edge materials.

To produce these on a large scale may be a little more difficult than usual though. Three sided displays will be using a plastic substrate that is apparently very limited in quantity and very hard to work with. So if there is going to be some sort of release by the end of the year then it would probably be a very limited Korean release to test the water and see how it does.

www.Rentacomputer.com Is One Of The Nation’s Largest Technology Rental Companies, Contact A Tech Travel Agent Today At 800-736-8772