The 2014 Moto X Is Even Better Than Last Year’s 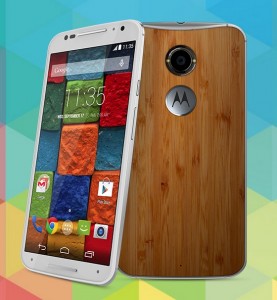 The Moto X came out last year, and despite its many great features, the phone didn’t receive too much love. The phone was very underrated even though it had a customizable design and touch free voice controls. It even had a really great display, much better than some other phones on the market. The 2014 version of the Moto X is even better than the last one, and the company hopes that it will be able to win over the hearts of consumers by offering a bigger display, better voice controls, and offering a contract with AT&T, Verizon, and T-Mobile for just $99.

The coolest feature of the original Moto X was the voice control. With the new one this feature is way better and you can now have touch-less interactions. You can do a lot more with just your voice now. You can tell the phone to take a “selfie” and it will automatically bring up the front facing camera. There are many other things like that that you are able to do, and it will also be able to work with third party apps like Facebook and YouTube. You can even name your phone now so that you don’t have to wake it up by saying “Ok, Google”. You can call it whatever you want. It’s like a little pet.

The phone now has four different microphones built into it so that it can better distinguish your voice from different noises around you.

The new upgraded camera is great. It is 13 MP and is capable of shooting 4K video now. There is also a feature called “best shot” that starts taking pictures as soon as it detects movement, just in case you are too slow. It stores them in its cache, and if you take an action shot that is close to one of those, it will compare them itself and automatically suggest which it thinks is the best one. Also, if you take a lot of photos in a specific location, it will automatically group them together and put a music track to them and make a little slide show. You can edit the pictures and the music, but either way it’s pretty adorable.

The new display is a 5.2-inch 1080p AMOLED. The phone is powered by a 2.5GHz Snapdragon 801 processor with 2GB of RAM, and it has a micro SD car slot. It also has two front facing speakers now that sound excellent.

Like the last Moto X, you can customize this one before you order it. It has a ton more options than the previous version including lots of options that look like different wood finishes. You can also change the color of the speaker grills. On the site when you design it, you can save multiple versions of your creations to compare before you buy.

Did You Know You Can Save Money By Renting A Smartphone? Contact www.Rentacomputer.com At 800-736-8772

The new version of the Moto X is a ton better than the last one, and last year’s version was one of the most underrated phones ever. Maybe this one will catch on!