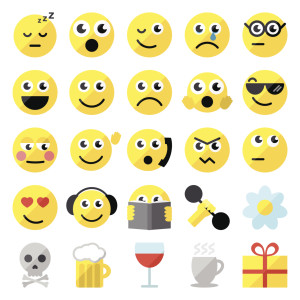 If you use either an Android smartphone or an iPhone, chances are you use SwiftKey. SwiftKey is a popular keyboard app for mobile devices that has the ability to learn and predict the favorite word of its users. If you use SwiftKey then chances are you also use emoji. Unfamiliar with that term? Emojis are the little cartoon pictures of things that teenagers and millennials have started to send to each other instead of words. Yes, that’s right our young generation has become so tech savvy that we don’t even need words to communicate, we can simply do it with a couple of smiley faces and a picture of a taco.

But have you ever wondered what the most popular emoji are? Have you ever sat back and thought, “Gee, I wonder which emoji people in Oregon use most often?” The answer to that question is probably no, but that didn’t stop SwiftKey from releasing a study showing data that analyzed the use of more than one billion emoji in order to determine the most and least popular ones for each state in the Union.

Once you see the list it actually kind of makes sense. For example, New York is on the top of the list of people who use the Statue of Liberty emoji, and rightfully so. Iowa, on the other hand, uses the corn emoji most frequently. Can you guess what they use in Hawaii? If you guessed the surfing, rainbow, waves, and pineapple emoji then pat yourself on the back because you either have a lot of common sense or you’re from Hawaii! Side note: Hawaii is also the leading state for the basketball emoji….which completely baffles me.

But the data didn’t stop there. SwiftKey even broke up the data into categories. South Dakota leads in the use of “Happy” emoji whereas New Jersey uses the most “Sad” emoji. Louisiana tops the list in the use of “Violent” emoji and is also the top state for the gun emoji (it really beat out Texas for that one?) Kansas, interestingly enough, uses the most “Tech” emoji with North Dakota using the least.

According to SwiftKey, 74% of Americans report using emoji every single day. In addition to that, nearly half of Instagram comments include an emoji. I’m not entirely sure if this is good news, exciting news, terrible news or even news at all but it certainly gives an interesting perspective to the people in our country. I mean who would have thought that people in Nevada love to use the eggplant emoji? Or that Oregon would favor the Star of David? And if you can tell my why in the world Mississippi uses the double underlined 100 emoji I will personally give you $1.

Other interesting/weird state-favored emoji include North Carolina‘s abundant use of the hamster emoji, Alabama‘s use of the elephant emoji, Connecticut‘s use of the koala emoji and Minnesota‘s use of the peach emoji (REALLY Georgia!? Minnesota uses the peach emoji more than you?! I’m so disappointed). My home state of Ohio seems to favor the bowl of ice cream emoji, which I thought was weird until I remembered Graeter’s originated in Cincinnati!

At the very least this is an interesting look into the cultures of each state. Sure the violent emoji in Louisiana may cause you to never visit there but the ghost emoji in Oklahoma and the gas pump emoji in Illinois are clear signs of some “exciting” states. If you want to learn more about this study you can check it out on SwiftKey’s website. The company has done some other emoji tests prior to this one. The first report analyzed more than 1.5 billion emoji across 16 languages with part 2 analyzing an additional 15 languages. It’s actually pretty interesting as well, it lets you know a little something about different countries, like the fact that Australia is a very naughty country. But please remember kids that even though emoji are fun and are a good laugh, words are still important….please for the sake of humanity don’t forget to use your words!