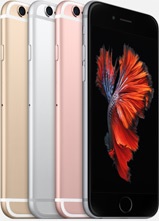 Apple has officially announced the iPhone 6S, an updated version of the most recent iPhone models that comes with an identical design and a host of new features. One of the biggest new features is the pressure-sensitive display, which enables a feature that Apple is calling 3D Touch. 3D Touch will allow you to press down on the iPhone’s screen in order to access new menus, activate shortcuts, and interact with the smartphone in new ways. The Taptic Engine from Apple is also built into the 6S in order to provide feedback. Apple also announced that all of these new features will appear in the iPhone 6S Plus.

Even though the 6S is being offered in the exact same size as the 6, with a 4.7″ display, it is being offered in a new color: rose gold. There was earlier talk that Apple might offer the phone in pink, so it is easy to see why there was some confusion. Rose gold, in the right light, looks an awful lot like pink. The iPhone 6S is also built out of a lot of new materials. A new aluminum is being used, which Apple is saying is its own custom alloy, and the display is also covered with the same Ion-X glass that is used in the company’s Apple Watch Sport. This design most likely came about to reduce bending, a serious problem that the iPhone 6 had when it first launched.

3D Touch offers users two new ways to interact with the device, which Apple is referring to as “peek” and “pop”. Peek enables you to press on app icons and other buttons in order to launch shortcuts directly into specific features. Pressing on the camera app will give you the option of taking a selfie immediately whereas pressing the Facebook app allows you to update your status, take a photo, check-in, or start a search. Pop allows you to pull up overlays of photos and videos without actually having them take over the entire screen. As soon as you move away you will be right back to where you started from.

The new 64-bit processor known as A9 is also included in the 6S. Per usual, Apple refused to give specifics on the processor, though it does say that it is going to be 70% faster at CPU tasks and 90% faster at GPU tasks over the iPhone 6’s A8 processor. In addition to that, Apple also added a 12MP rear camera. This is the first time that Apple has increased the camera’s megapixel count since the iPhone 4S launched back in 2011. Apple has long believed that it wasn’t worth adding the pixels as it would lead to noisier images. But it seems that Apple now believes it has managed to make the upgrade without this happening. The camera is also capable of recording videos in 4K and is supposed to have an improved autofocus in all cases.

The front camera has been upgraded to 5MP and has also received a flash setting. The new flash setting has the phone’s display lighting up really bright when you take a picture. It’ll also customize the color that flashes in order to match the ambient lighting of your environment. Oh, and I hope you like taking videos because the iPhone 6S is going to make you want to take a lot. Apple is debuting a feature called “live photos” which will capture a short video clip alongside every photo that you take. You can turn the feature off, but it is on by default. The feature captures 1.5 seconds of video on each side of the photo. A neat idea, albeit not a new one. This could cause some storage concerns as all of that video is going to take up a lot of space.

Faster wireless speeds are also supposed to be coming with the iPhone 6S for both WiFi and LTE. Apple says that WiFi should be twice as fast and LTE is improving with the addition of more bands, 23 to be exact. Touch ID is also getting an improvement. Again, Apple didn’t go into a lot of detail but the assumption is that it will be faster or more accurate than the sensor on the iPhone 5S and iPhone 6.

The new iPhone 6S will start at $199 on a two-year contract for the 16GB version, then increase to $299 for the 64GB and $399 for the 128GB. However, most carriers are now offering month-to-month payment plans instead of contracts. Apple is offering a few of those too with the 6S available for $27 per month. A more interesting payment plan has users paying $32 per month, which allows you to lease the iPhone 6S and then return it for a new model every single year. This also includes AppleCare+ warranty from Apple. Preorders will become available on September 12th with the phone going on sale September 25th.

Sharing this story on Social Media? Use these hashtags! #Apple #iPhone #iPhone6 #iPhone6S