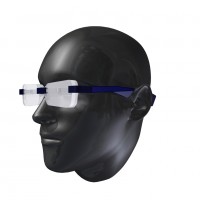 Wearable tech has really taken off this year. Products like smartwatches and smartglasses are changing the way we think about mobile connectivity. Smartglasses alone have the ability to not only change the way that we think about traveling, but also to have a huge impact on how we actually do it in real life. It was only a matter of time before more companies started popping up and taking advantage of this new craze.

There is a small and completely unfunded 5 person team in Massachusetts who has created an alternative to Google Glass. They claim that their new product is way more fashionable and way less nerdy than Google’s new smartglasses.

The new glasses are called “smartspecks”, from LaForge Optical. They basically do everything that Google Glass does: provide you with directions, record videos, take pictures, and even let you check your Facebook and Twitter. Like Google Glass, connectivity to the cloud is through your phone. The big difference between the two is that with smartspecks, the whole thing is powered by an app on your smartphone.

Everyone in the group is either attending or has previously attended the Rochester Institute of Technology. They were all working on a home automation product and decided on smart glasses being the solution for a user friendly, hands free and convenient method of control. This turned into way more than a school project, it’s actually a full blown Google Glass competitor

The new product has a far more mainstream look than Google Glass. They work as a regular pair of prescription glasses and have a fully immersive user experience. This is the best thing they have going for them.

This team of developers has already went through two working prototypes of the product and are currently working on the third. They will be opening pre-orders on their website for a few select customers, probably about 100. The pre orders will be up some time this week. After that, they will be launching a Kickstarter campaign to raise more interest from potential customers and raise more money that they will use for a larger production run.

This is how they work:

The new smartspecks will use a custom frame that will house all of the electronic components like the battery, display, and the bluetooth antenna. Everything will be embedded into the frame. The lenses are custom made and can be cut to just about any shape that you’d want, and will allow users to see all of the information right in front of you. The app that runs the glasses sends information between your smartphone and the glasses. When plugged into your phone, you will also be able to answer phone calls and use the build in microphone to talk.

I was excited about Google Glass before I found out that I could have all the perks without looking like I just left a Star Trek convention. Has Google Glass been beaten before they even get off the ground? I guess we’re about to find out!