The New Mac Pro Special Addition For Less Than $1,000? 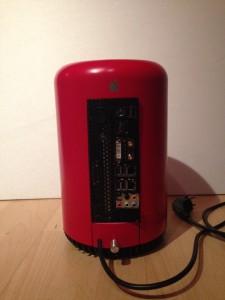 How about a little bit of word association. When you see the word “New”, what do you think of? If the first word that comes to your mind is “Expensive”, 9 times out of 10, you are right. This is definitely the case when dealing with well known companies. Getting the latest tech is never cheap. Take Apple for example. Go ahead and pull out your iPhone or iPad. Now remember how much you paid for it. Are you still shuddering at the thought? Well this might make you shudder even more. The new Mac Pro sits at a pretty hefty price of $3,000 for the cheap model and $4,000 for the top of the line model. If that wasn’t bad enough, a customized Special Edition Red Mac Pro just sold for $977,000.

It should come as a surprise to no one that products like this are going to be pricey. When well known designers come into play, you can expect the products price to skyrocket. At that point you are paying for the product and BOTH the name of the designer, and the product’s brand. Not many of us have 1 million just laying around to throw at people, let alone $3,000 to purchase a high end computer tower. This is why you see so many people (mainly in the computer gaming community) building their own computers. In the long run, it can be cheaper. That is, as long as you know what you are doing, how to build it, and what components to look for. There aren’t many of us that are tech wizards so we usually stick to just purchasing our computers.

But, for every 10 people that go to purchase their computers, there will always be at least 1 person to try to build their own. They may even try to emulate specific models. The Special Edition Mac Pro just happened to receive this treatment from a user on a nameless German forum from a user named “sascha288” towards the end of 2013, around the time the original Mac Pro went on sale. Many have made fun of the original design, stating that it looks like a trashcan. Well, as luck would have it, the casemod design went ahead and used a trashcan for the outer shell casing.

For those of you who may be wondering what is making this casemod tick, “sascha288” attempted to make it as close to the real thing as possible. Under the hood, you’ll find a Core i3 Haswell processor, a Radeon 7750 graphics card, a 120GB hard drive, a Gigabyte Z87N-WIFI motherboard, a Scythe case fan, and a Samsung 120GB solid state drive. If you are wanting to make your own rendition with these components, you will be spending roughly $800 for everything. This is why you hear people saying that they built their own computers for around $600 to $700. Never a bad plan.

Keep in mind though, not everyone can be a computer building master. For those people who are not, myself included, it is always the best option to get information on your product and try before you buy. You may not even need that much power, but you won’t know until you do your homework and give it a good test drive.