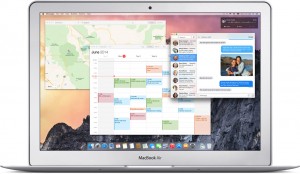 Whenever Apple comes out with something new, expect the entire internet to go absolutely crazy and report everything they can about it. Now I’m not saying that I’m not the same way because as a fellow techie and Apple fan, I love all things Apple. Over the past few months, we’ve heard a multitude of rumors circulating about what this years World Wide Developer’s Conference was going to bring us. Rumors of new possible hardware kept the internet ablaze with different mock up representations and “what-ifs”. Yes iWatch, I’m talking about you. But even though there is so much that went into the keynote of this years event, we need to remember that Apple isn’t just iPads and iPhones. They take just as much care for their laptops and desktops as well.

What did they bring us this year? Why, the beautiful new OS X 10.10 Yosemite of course.

So what exactly did this brand new OS update bring us? Lets just say a lot more than I can tell you about in one post, but I’ll do my best to sum up some of the main/best/coolest features and points.

First off, when you install the new update, you’ll notice the completely new redesign. Much like what we saw with the iOS 7 update on our iPhones, the icons and dock have been completely redone to give off that same clean and simplistic look. Instead of having that reflective, almost mirror-like dock, it is now flat and two dimensional. The dock holding the icons now has more of a translucent look to it. The Notification Center on the Mac is now a lot like the iOS version as well. What this means for us Mac users is that we will be able to perform many different functions with from the same place on our Macs. It also puts more belief in the fact that Apple will eventually merge iOS and OS X into one entity to allow for a seamless experience across all devices.

The next thing that really had me impressed was the enhanced Spotlight Search. Instead of the small search bar in the top right corner of your screen, now you will be met with a large search bar smack in the middle of your screen. In all actuality, it almost feels like Google without having to get on Google. The enhanced search even includes some auto-complete results as you type. These can open and launch apps directly. They can even bring up search results right for there for you as you type it in. Again, just like Google without the need to open up Safari.

The last feature that really blew me away was the ability to make and accept calls directly from you Mac computer. Whether it be your Macbook Air, Macbook Pro, Mac Pro, or what have you, you can now talk on the phone directly from your computer. By utilizing the computers microphone and speakers, you’re essentially having your computer act as a speaker phone. You can even read non iMessage texts directly on your computer as well. You can even respond to them too. The non iMessage texts are those people you text that don’t have the blue bubbles, just in case you were wondering.

While the update isn’t out for the general public yet, it will be available in the fall for FREE. It’s currently only available to developers and select people for beta testing, but overall, it looks incredible. I know that I’m not the only person who will be getting the new update. Is it Fall yet?

For An Apple Technology Rental Contact www.Rentacomputer.com Today At 800-736-8772