Google Put Project Tango Up On Google Play, But It’s Not Available Yet 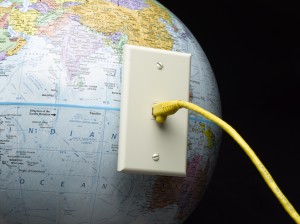 The Tablet With The 3D Sensor

In case you’ve not heard anything about Project Tango, it’s Google’s new tablet which actually senses the space around you via 3D sensor technology. Not only do the sensors sense the geometry of the area around you, but they also work to understand physical motion while you move with the tablet. At Google’s I/O conference, Project Tango was arguably the biggest hit of the entire event. The speaker there was able to demonstrate how the tablet could actually map out the entire stage he was on in real-time.

The tablet itself isn’t available just yet, unfortunately. The good news is that there are a few specs on the device. It will be coming with a 7-inch display, for one. The tablet with also be accompanied by 4GB of RAM and up to 128 GB of storage space as well. The OS is slated to be Android’s 4.4 KitKat OS. The Project Tango tablet will also come standard with NFC, or near-field technology, which just so happens to be the same type of tech used by the new Apple Pay.

When you hear about a tablet that can actually map areas out in real space and in real time, you’re more than likely going to want to give it a try for yourself. Unfortunately, Google likes to tease us. By this I mean they’ve decided to put the new device up on Google Play, but only in a viewing mode. That’s right. You can look, but you can’t touch, so-to-speak. Developers are the lucky ones however. While they might not be available to purchase right now, the tablet that’s currently on Google Play is marketed to have developers create apps on the new technology. Should that be the case, developers should be getting their hands on the new tablet a bit earlier than all of us. For the rest of us “non-developmental” folk, we are going to have to wait until 2015 before we get a chance to walk aimlessly around our houses and map them out.

It’s exciting to hear about what Project Tango can do. That being said, it is slated to come with a nice $1,000 price tag. It’s also been confirmed that the device will be sold WITHOUT warranty. So what does that mean for you? That means that should you become one of the first to jump at this new tablet, you’d better not be upset if and when something bad happens to it.

It might be your best bet to wait on this tablet a little bit longer, even after the 2015 release date. After all, it’s much better to try out new technology after you know that all of the bugs have been taken care of, right?

It will be interesting to see just how many people will go for this new tablet and what the implications will be as well. There’s a lot to do with this new technology, but only time will tell.