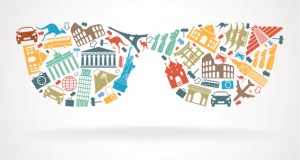 New devices popping up like Google Glass really have the potential to create a whole new industry of devices that are generally referred to as “wearables”. Though at the same time, they could very well turn other industries upside down, travel being one of the most prone to this disruption. Travel, by nature, requires very specific information that is tied to locations. This is something that web services have gotten quite good at bringing to the surface. Put that together with the convenience of a wearable device and it feels like a for sure winner.

The big question of whether or not this will be accepted by consumers is still there, and the answer to that question is going to decide whether or not the smart glasses will go mainstream. But even if they don’t, they could still find their niche in providing tools for power travelers.

The freedom of Hands Free

The marketing firm MMGY Global has seen the potential in smart glasses in travel settings and immediately launched a whole campaign based on it. The company recently sent five of what Google calls “Glass Explorers” (people that they have outfitted with Glass before its actual release in 2014) to Fort Meyers and Sanibel Island to document their whole travel experience using the Glass.

“There is so much possibility with wearables that it’s really exciting for the travel industry,” says Robert Patterson, vice president of social media and influencer marketing at MMGY Global. “It’s not really a platform, it’s a lifestyle.”

Along with other connected headsets, Google Glass in particular is very good delivering specific information to its users without needing to have a smartphone. Maps, photos and even local facts are all of use to travelers. But it has become clear that the main thing users are interested in doing with Google Glass is to capture and share photos and videos.

“The main thing that smart glasses do is let the user stay in the moment,” says Chris Grayson, a spokesman for Telepathy, which plans to release a smart glasses product by the end of the year. “One does not have to reach into their pocket and get sucked into the world of their device.”

The fact that most users of smart glasses are focusing on sharing photos and videos of their travels and during their vacations is an outgrowth of how social media itself has changed over the past few years, Patterson says.

“We’re finding more and more people are not disconnecting during their vacations, and they actually enjoy being connected as being part of their vacation experience,” says Patterson. “They’re sharing those moments with other people.”

Even though our access to social media has been made so easy with today’s smartphones, even to the point of some of us even getting bored with it, smart glasses are breathing new life into social media and taking it to the next level by making the whole experience completely hands free. The convenience even extents to maps and alerts, using them will become easier if there is no smartphone involved to hold or look down at. When these services are completely necessary while traveling, smart glasses are starting to look like the most attractive option.

Google has clearly seen all of this. And because of it they have re designed the FieldTrip app just for Google Glass. When it’s activated, the app sends the user alerts related to their immediate location, making sure that landmarks and even popular restaurants are never overlooked.

“Being hands-free and having the technology be intuitive to the point that it’s there when you need it and gone when you don’t is really essential,” says Patterson. “A lot people focus on the photo/video aspect, which is really fun. But the local discovery, having all those things tied together, makes it a complete package.”

While there is still a ton of excitement around smart glasses and wearables, they also bring concerns, mostly about privacy. Though facial recognition is explicitly barred from Glass for the moment, other manufacturers do not have that policy at all. On top of that, differing cultures and their attitudes on tech throughout the world, and international travelers should be very careful about using these devices when exploring.

“The whole area of hands-free image capture has both advantages and restrictions as to when it will be appropriate,” says Paul Travers, CEO of Vuzix, which has been manufacturing connected headgear for years. “This is most likely something that will be dealt with through common sense, peer pressure and etiquette as was the case with cellular phones, but in some cases restrictions will, and should, be put into place.”

As smart glasses continue to gain popularity and acceptance, they could also be disruptive for the hospitality side of travel on the consumer side of things. One day it could be normal for flight attendants to wear connected headsets, ready to give out personalized information to better serve the costumers.

“A flight attendant [wearing smart glasses] might know there are people with special needs on the flight,” suggests Patterson. “You could have the flight roster always present. How could that let them better customize their service?”

Would YOU ever wear smart glasses while traveling?