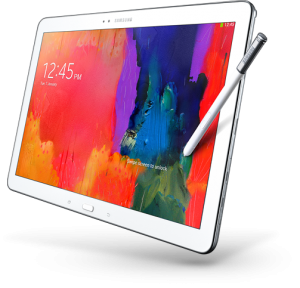 Samsung has really outdone themselves with the new Galaxy TabPro 12.2, and they may have just set the bar for the entire productivity tablet market, thanks to its large array of business apps.

The TabPro comes out of the box with tons of useful goodies like a free subscription to Hancom Office, and three month Linkdin premium membership, an Evernote subscription, and 1TB of free storage on Bitcasa. As if that wasn’t enough, you also get a full year subscription to Bloomberg Businessweek+ and The New York Times. Another neat subscription it comes with that isn’t so much business related is Remote PC, which lets you access your PC from the tablet.

The new Magazine UX operating system for the TabPro stays true to pure Android roots by keeping things very visual and easy to navigate through with the use of widgets, and also keeping all of the customizable options that Android has always been known and loved for. The biggest change is just the look, but it even allows you to completely switch back to the traditional Android interface if you’re the type of person that doesn’t like change at all.

This tablet is obviously taking a jab at the Windows tablets that are coming out and aimed more toward business and productivity. Those tablets let you use two apps on the screen at once, and the Galaxy TabPro 12.2 lets you use four at one time. How much more productive can you get? Another thing that Android has against Windows, is that without a doubt, there are way more apps available for Android. The amount is actually staggering.

Even though there isn’t a keyboard that comes with the Galaxy TabPro 12.2, Logitech is going to release it’s own keyboard made specifically for this tablet. It is the same size as a standard laptop keyboard and conveniently folds around the tablet to make the pair easily transportable.

Looking For A Tablet Rental For Your Next Business Event? Click Here Or Call www.Rentacomputer.com Today At 800-736-8772

The 12.2 inch screen on the Samsung Galaxy TabPro is the biggest screen that has ever been on an Android tablet. It has a 2560 x 1600 resolution, so it will produce a crisp, clear picture to go along with that huge screen. It also has a 9,500mAh battery, a microSD slot so that you can upgrade your storage space, and one Micro-USB 3.0 port. It is a little surprising that they didn’t give us a full USB 3.0 port, but hey, everything else makes up for it right?

The TabPro 12.2 will be release in a Wi-Fi only model and also an LTE model. This is also appealing for all of you businessmen on the go. There will also be a 32GB version and a 64GB version of each model available soon.

If you have been thinking about moving all of your work from your PC to your tablet, there might not be a better time than now with this bad boy coming out. It seems like there isn’t too much you couldn’t do with it.