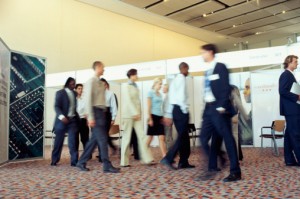 Mobile technology has become a huge part of trade shows and conventions with both guests and vendors utilizing mobile technology to their advantage. While laptops have been the go-to for mobile tech users in the past, the modern tech junkie is more interested in tablets. Tablets utilize almost everything that a laptop has to offer with the mobility of a smartphone (albeit a very large smartphone).

One of the best selling tablets on the market right now is undoubtedly Apple’s iPad. The iPad is perfect if you plan on being constantly on the go as it is very thin, light and easy to carry around. In addition to that, the iPad also comes with a plethora of storage options, including 16GB, 32GB and 64GB meaning that this device is entirely capable of handling any on-the-go data tasks.

Apple is constantly updating its iPad, adding bigger and better features in an attempt to stay on top of the tablet market. One of those features is Apple’s Retina Display. The engineers at Apple have completely rethought how the conventional pixel display technology works. The Retina Display is the current state-of-the-art display from Apple.

This display technology is capable of displaying four times the pixels than Apple’s iPad 2, meaning you get to experience richer colors and razor-sharp text. The iPad has a million more pixels than a standard HDTV, meaning your computing experience has been aesthetically enhanced with a native 2048 x 1536 resolution.

Walking around a convention center or setting up a booth at a trade show and connecting with potential customers or business partners can be a difficult task, but it doesn’t have to be. With the mobility and computing power offered by Apple’s standard iPad, the iPad Air and the iPad Mini, trade show and convention worries are a thing of the past.