A Macbook Pro At The Cincinnati Playhouse in the Park! 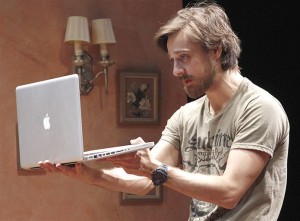 Robbie Tann in 4000 Miles at Cincinnati Playhouse in the Park – Photo by Sandy Underwood.

We wanted to take this opportunity to say thanks to a great customer and tell our readers about a little known, but very interesting, use of our technology rental products.

That great customer would be The Cincinnati Playhouse in the Park.

Some interesting history of the Playhouse can be found on Wikipedia and reads as follows: The Playhouse was founded in 1959 by college student Gerald Covell and was one of the first regional theatres in the United States. Located in Eden Park, the first play that premiered at the Playhouse on October 10, 1960 was Meyer Levin’s Compulsion. The Playhouse has been under the leadership of Edward Stern and Buzz Ward since 1992. In 2004 the Playhouse received a Tony Award for Best Regional Theatre. Then in 2007 the Playhouse received a second Tony Award for their revival of Company, which won Best Revival of a Musical. The production was directed by John Doyle and also won Drama Desk, Outer Critic’s Circle and Drama League Awards for Best Revival of a Musical.

About a month ago we received a call from the Playhouse, and we had the pleasure of supplying an Apple Macbook Pro rental that’s currently being used in the play 4000 Miles By Amy Herzog. If you’re in the southwest Ohio area and are interested in catching 4000 Miles you will want to get your tickets soon! The play is running from Feb. 8 – March 9, 2014.

The little known use mentioned above is, of course, short term technology rentals for theaters, movies, and TV shows.

Not to be confused with non-functioning props, our technology rentals are the real deal and are perfect for those times when a scene requires a truly operational device to enhance the realism.

So, the next time you’re watching a play, a movie, or your favorite TV show and you see a room full of computers or an actor holding a MacBook Pro… remember www.Rentacomputer.com can help make your scene all the more real!

P.S. The most memorable TV scene with a computer that comes to my mind is the opening shot (for the first few seasons) of Seinfeld that featured a Macintosh SE sitting on the corner of Jerry’s desk. If anything comes to your mind, leave us a comment below!