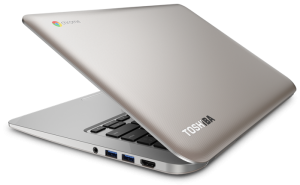 When people think of a Chromebook, there really isn’t too much to be excited about. Generally, they are basic, barebones computers that are mainly just used for surfing the web casually. Toshiba is about to release their Chromebook 2, and it might just change your mind on that a little bit. It is one of the most powerful Chromebooks yet. It is also a little bit lighter than the last version and comes with an upgraded 1080p display. It comes out on October 5th for $330.

The new Chromebook 2 looks a lot like a MacBook Air actually. It has a brushed aluminum body, slim edges and black island keys. I’m assuming that the design similarities were probably intentional. The laptop has SkullCandy speakers which is really interesting to me, and it probably sounds very nice. Toshiba says that this makes the Chromebook 2 the very first Chromebook to come with branded audio. The speakers are also located under the keyboard instead of the usual spot above the keyboard that we would expect. I found that to be pretty neat.

The Toshiba Chromebook 2 is packed with a 2.16 GHz dual core Intel Celeron N2840 processor. It comes with up to 4GB of RAM and 16GB of internal storage space. Most Chromebooks offer up to 100GB of free Google Drive storage for two years after you purchase the computer, this one is no different. So you have that to look forward to. For $330 you can get the 13.3 inch full HD 1080p display, but if you want to save $100 then you can go with the 1366 x 468 model instead.

The first Toshiba Chromebook was quite popular because of its super nice display, good audio, its performance, and its long battery life. This new version should be a lot better with the new design, the full HD display, and the new SkillCandy speakers installed. If you liked the last version, you are bound to love this one.

Laptops, Chromebooks, And Netbooks–www.Rentacomputer.com Has Them All, Call 800-736-8772 Today