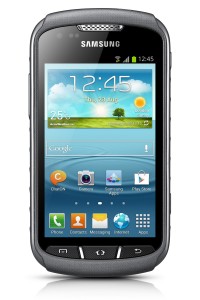 Samsung has just unveiled its newest smartphone, a rugged take on the Galaxy. Known as the Galaxy Xcover 2, this smartphone is built as a durable and rugged smartphone that is described as being able to handle the most extreme outdoor situations, making it perfect for professionals who are in risky situations.

The Xcover 2 is both dustproof and sandproof and is also able to handle being completely submersed in water up to a depth of around 30 feet for up to 30 minutes. While you may not see the need to text or make calls while under water, you will be pleased to know that this smartphone’s camera is able to function fully under water.

Google Map information is also provided by the device as is an enhanced GPS/GLONASS feature. The LED flash provided by the camera is bright enough to be used as a guiding light in dark situations while the 1,700mAh battery boasts a run time of 570 hours.

In addition to that, the phone comes with a Cardio Trainer Pro app, allowing you to monitor a personalized training program. The operating system utilized by the Xcover 2 is Android 4.1 Jelly Bean while the device is powered by a 1GHz dual-core processor and the screen offers a WVGA display resolution.

A 5MP auto-focus camera is also included on the back of the device while equipped with a front-facing VGA camera. Bluetooth 4.0 is also included, which Samsung says can detect devices up to 164 feet away. The only real downside to this device is that Samsung has yet to announce when and where this device will launch or how much it will cost once it does become available. However, Mobile World Congress is right around the corner so hopefully more information will become available then.

Rugged technology is becoming increasingly more popular, especially among businessmen who find themselves in outdoor work environments like construction sites or other similar areas. Even military personnel are starting to pick up rugged laptops and rugged tablets for when they are deployed overseas. If sales of other rugged equipment is any indication, the Samsung Galaxy Xcover 2 should be a hot item.