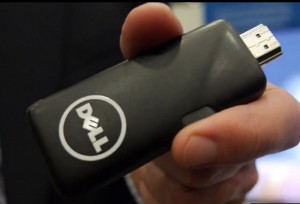 Dell recently unveiled a prototype of a pocket-sized HDMI stick that is capable of turning any compatible display into a virtual PC, able to run Android apps or remotely access Windows apps on a cloud service or remote PC.

The device, which is known as Project Ophelia, is the product of Dell Wyse, the business unit formed from Dell’s acquisition of Wyse Technology. Tarken Maner, former Wyse CEO and current VP and General Manager of Cloud Client Computing at Dell, expects the device to cost less than $100 at launch.

The HDMI interface allows Project Ophelia to be used with big-screen displays like HDTVs, making the device an inexpensive means to create a computer anywhere the stick can connect to a network via WiFi or Bluetooth. Maner also believes that telecommunications companies that are looking to sell cloud services might subsidize the device the same way they discount cellphones to customers who commit to service contracts.

On the other hand, there are some substantial potential hurdles that are in the way of Project Ophelia’s success. While a majority of hotel rooms have things like HDTVs, they don’t typically have a readily available mouse and keyboard. That just means another thing that you have to bring with you if you’re traveling.

If connected to an MHL-compatible display, Project Ophelia doesn’t require any additional power. If you are unfamiliar with the term, MHL stands for Mobile High-Definition Link and is a technology that delivers power from the display to the device while displaying its contents. Unfortunately, this technology is relatively new and HDTVs that utilize it are only now starting to appear on the market. Without this technology, Project Ophelia must be charged from a USB connection.

The other downside is that an inexpensive tablet can do much of what this dongle is promising and they don’t involve the hassle of dealing with other computer peripherals like a mouse and keyboard. While it is true that a decently sized tablet with good features is going to cost you more, the trade-off could be worth it in the long run.

If you do find yourself traveling and you don’t want to haul all of your computer equipment with you, then you could rent computer peripherals from Rentacomputer.com. Rentacomputer.com has everything you need to have a fully functioning computer setup and is always there for you in a pinch, especially if you’ve left your mouse or keyboard at home.