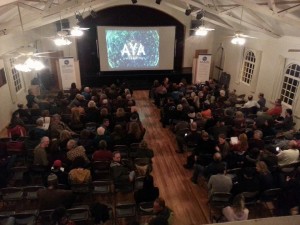 Did you ever stop to think that for every big event you see on TV, or read about in the paper, there are thousands of small gatherings  all across the country that are bringing people together and making their lives a little brighter? That was the case in Santa Cruz , California last weekend with the local premiere of a documentary film by Rak Razam, a “founding editor of  Undergrowth, Australia’s leading alternative arts and literature magazine, and the world’s leading experiential journalist, writing about and helping shape the emergence of a new cultural paradigm in the 21st century.”1

This particular documentary, “AYA: Awakenings is a narrative documentary into the world and visions of ayahuasca shamanism, adapted from the cult book ‘Aya Awakening: a Shamanic Odyssey’ by Rak Razam.”2  Promoted in local publications, and through social media, small venue events of this type provide a truly intimate community experience that, as was the case in Santa Cruz las weekend, can still attract panelists from all over the globe.

In this type of small venue a 16’x9′ screen rental can really set the night apart from your average community gathering. Portable, rugged, and easy to set up, a 16’x9′ screen rental makes the perfect backdrop for not only film premieres and screenings but panel discussions with  supporting audio visual materials.