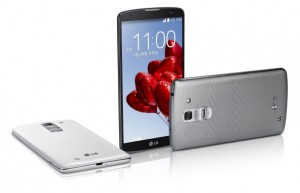 Yesterday in Korea, LG pulled back the curtains on the new G Pro 2 and officially showed it to the world. The new feature that everyone is really excited about is that it has a front facing camera with a flash. It’s also rocking a quad-core processor and comes with a ton of new software. Although a world wide release date hasn’t been decided on yet, the new G Pro 2 is supposed to go on sale in Korea at the end of this month, just after making it’s first physical appearance at Mobile World Congress.

The LG G Pro 2 is 6.21 inches tall and 3.22 inches wide, which is pretty big for a phone. The display itself is a full HD IPS with 1,920 x 1,080 resolution. That is a huge step up in resolution from LG’s current version of the G Pro, but the pixel density drops just the slightest amount. Probably not even enough to make a visible difference in quality. It is also still sporting the same design as the original by housing all of the control keys and power buttons on the back of the phone’s casing. When it officially drops, it will be available in three different colors: white, silver, and titan.

Just like many other top tier phone’s, like the Google Nexus 5, the processor in the new G Pro 2 is a super powerful 2.26GHz quad-core Snapdragon 800 paired with an Adreno 330 GPU. The capacity of the battery is greatly improved from the last G Pro model as well, going from 3,140mAh to 3,200mAh

The cameras on the phone are what everyone is the most excited about. The rear facing one is 13 megapixels and it will have the ability to shoot video in 4K resolution. Taking after the iPhone, it is also equipped with a slow motion feature and a burst shot mode for taking tons of pictures really fast. Other cool camera features are “Magic Focus” which lets you adjust the depth of the cameras focus, and of course, the front facing flash.

It might seem like a really silly idea, but I could see it coming in pretty handy in some cases. You could even use it for video chats in low light settings if you didn’t mind going blind a little bit.