Gmail Is The First App To Reach One Billion Installations 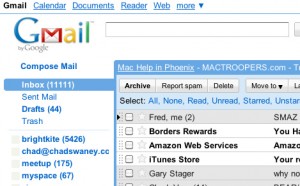 It’s official, Google’s Gmail app is the very first standalone smartphone app to have over one billion installations on Android devices.

Sundar Pichai, Google’s head of Android announced that this huge accomplishment was made last week. The Google Play store ranks their apps in different brackets, and now the Gmail app is in the 1-5 billion bracket. This is even more impressive once you realize that updates do not count as installations. No matter how many updates there are, there is no double counting. The Google Play Services app doesn’t count either, which is even crazier.

All of the Google Android devices already come with the Gmail app right out of the box. This includes Google powered phones, tablets, and phablets. Other Android devices like the Amazon Kindle Fire and Microsoft’s Nokia X smartphones do not come standard with Gmail already installed, and it is not possible to download the Gmail app from their app stores. The one billion downloads are also not including any downloads on Apple devices, only Android devices that offer the app.

Currently, Gmail is the only standalone app to ever reach this amount of installations. There are a few GROUPS of apps that have collectively been installed over 1 billion times like the Angry Birds collection of games, and the different versions of Talking Friends, but all the versions of those apps count toward their numbers. Gmail is by far the clear winner.