Amazon’s Fire Phone Is Now More Than Just A Rumor 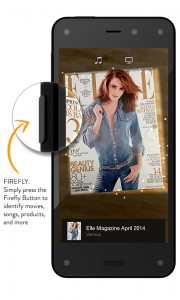 It seems that all of the rumors going around for the last few months have been completely true! Amazon CEO Jeff Bezos officially announced their new smartphone at a private event in Seattle yesterday. The phone is not super flashy looking, but that wasn’t the point. The idea behind the phone is to be a slim, sleek device that will allow you to do just about anything that you would ever want to do. The point to this phone is all about the functionality.

The standout feature of the phone is that it is equipped with Firefly. This will allow Amazon’s new Fire Phone to scan and accurately identify just about anything. We’re not talking about bar codes here, I mean you can scan items, music, signs, and even hand written letters and find information or anything you want to know about them. You can also scan bar codes, of course.

Not only is this feature pretty fun, but its really genius on Amazon’s part. It is the main feature and one of the main selling points to the phone, and now you are going to have thousands of users scanning everything around them. People will be able to scan things that they see at stores, or at a friends house, or anything, and it will be a great way to reroute people back to the Amazon site in case they want to buy what they are scanning.

Amazon is putting out a lot more hardware lately, and they are possibly the smartest company on earth. Every piece of hardware has been cheap, as capable as anything else on the market, and no matter what the hardware is, it always leads customers back to Amazon to buy something. Amazon’s plan is almost so good that it should be illegal. I wouldn’t be surprised if they turn into their own economy in the next few years.

One of the other cool things, and a huge part of their strategy to take over the world, is Prime. For just $99, users can buy a member ship and immediately get access to unlimited 2 day shipping on products from Amazon. It also lets you stream unlimited movies, music, and borrow e-books. All of the other Amazon devices have Prime as well, like the Fire TV ad the Kindle Fire.

It’s crazy to see something that has been rumored for so long with zero hard evidence actually come to life. It is said that this phone may have been in the works since about 2009. Amazon has pretty much been able to dominate any market they step in to, so it should be interesting to see how popular the new Fire Phone ends up being.