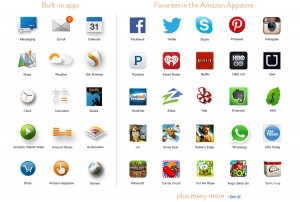 If you are reading this, you probably have a BlackBerry. If that’s the case, then you are already messing up. But that’s ok! It seems like BlackBerry users are going to have access to a lot more apps pretty soon.

On Wednesday when Amazon made their huge Fire Phone announcement, BlackBerry also announced that they will be bringing Amazon’s Appstore to their devices. Amazon’s Appstore wasn’t expected to be anything special, but it actually has about 200,000 Android apps. So finally… BlackBerry users will be able to do something besides send emails and get made fun of!

The big change isn’t going to take place until the fall. This is when BlackBerry 10.3 is going to launch, so it makes sense. The big move will bring tons of different popular apps to BackBerry for the first time ever. This is going to help BlackBerry out a lot. It’s no secret that the company is failing, but this may be just what they need to keep their current users from moving on to something else. It is doubtful that BlackBerry will pickup any new customers just because of the new apps, but it does give them the opportunity to create something new and fresh and maybe get some new customers that way. There is no reason that they can’t compete now that they have access to Android apps.

After the big changes that the company went through last year, they have been focusing on cutting costs to make BlackBerry profitable again. Not only that, but they have really been trying to address all of the issues that their users are coming at them with. It seems like they are actually starting to take themselves seriously and operate like a real company again.

Right now, Amazon and BlackBerry are working with their developer community to make sure that everything gets done in time for the change. BlackBerry developer will have access to all of Amazon’s Developer Select programs and other promotional programs. They will have everything they need to make sure that these apps reach as many customers as possible and with the least amount of issues.

Since last year, the Amazon Appstore has tripled in size, and it is going to be a huge breath of fresh air for BlackBerry to be able to take advantage of it and call it their own.