Apple May Be Putting Out More Than One iWatch 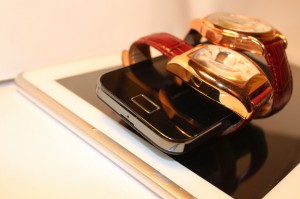 New rumors and hard evidence are pointing to a few different variations of Apple’s rumored iWatch. There may actually be more than one in the works.

Over the last year or so, Apple has been hiring tons of people to help with their new wearables projects. Most of the new hires have talked about the type of things that we could expect, like fitness, apps, email, and general technology things that Apple is known for. For a while it was assumed that Apple was just going to put out a smartwatch that was already outdated before it hit the streets. But, they recently stole an executive from TAG Heuer and brought him on board. This has shed a little more light on the situation and even sparked some new and exciting rumors.

What would Apple want with a luxury watch executive? Good question. It appears that Apple has more in mind for their new watch than just calorie counting and email. This move suggests that Apple is actually about to drop a super high-end watch that you’d be able to buy at fine jewelry dealers along with Movado  and other high-end watch brands. It would be really nice to have a watch that you could feel good about wearing and still have some tech tied into it.

Another good thing about Apple’s new hire is that it will allow them to build relationships and distribution channels throughout a new market that they don’t have any experience in yet. Other companies that have already released their versions of a smartwatch have really only been selling their products in electronics stores and mobile carriers along with the usual cell phones. Although this isn’t a bad thing when you are targeting the techy market, Apple may be on to something with the whole selling watches in watch stores thing. It seems pretty obvious now that you think about it.

It might be a little odd to see an Apple branded watch in a setting like that, and that is where the other versions of the watch come into play. Smartwatches already on the market are way too sporty for that kind of thing, and a lot of the people who are in the market for a smartwatch might not want something that they would be afraid to scratch or damage. It turns out that the high end smartwatch isn’t the only thing that Apple is cooking up, but there will be more predictable products available as well.

All of the products they put out might not be actual “smartwatches”. There will probably be a whole line of different watches and fitness bands. Apple has made it really clear that they are taking their new line of products very seriously and have hinted that a lot of them will fall under the wearables category.

This could be a huge thing for the watch market in general. Remember how the iPhone changed the way we thought about phones forever? What if Apple literally reinvents the watch and changes the entire market? I’m completely against wearables in general, but even I would probably sport a nice luxury watch from Apple to check my email on.