Nvidia Comes Out With Their Own Tablet 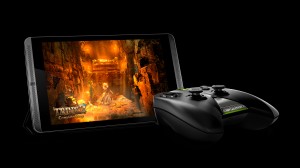 Generally, Nvidia is known for being a company that makes really good graphics cards and some mobile processors. So it is a little bit crazy, but they just put out their own tablet called the Shield. It was announced on Tuesday and it is specifically designed to be a gaming tablet. It even has its own wireless controller!

There was another Shield device that came out last year at CES. It is now called the Shield Portable, and this new gaming tablet is its followup product. The new Shield tablet can even sync up with the old Shield device. This way you can set it up to use the old Shield as just a controller and prop up the new one, sit down and enjoy your gaming experience however you want and wherever you want. This gives you the most convenience and the most portability.

This 8-inch tablet runs on the Android operating system, comes with a beautiful full HD display and front facing speakers so that you can get the most out of your gaming. It comes in a few different versions too. You can get the 16 GB version with Wi-Fi or the 32GB version with Wi-Fi and LTE services. If you don’t have the previous Shield device, you can buy a controller for it for just 50 bucks. There are also some other accessories available like the optional tablet cover that also doubles as a stand so that you can sit it up on a table like a TV while you’re gaming or watching videos. The main focus of the tablet is gaming, keep in mind that it still does everything a normal tablet would do as well.

The Shield already comes loaded with a big selection of games like Trine 2, War Thunder, Anomaly 2 and a gaming hub with more than 400 games that are all optimized specifically for the Shield.

You can also stream lots of PC games like Titanfall and other popular titles over Wi-FI. The only downside is that the PC has to have an Nvidia GeForce GTX in order to do that, but you should have seen that coming. If you don’t have that then you can still download Android games and sync them to your controller. It also integrate with Twitch, so you get get into some social gaming with others and share all of your best in game moments.