Watching this CD Explode at 170,000 FPS is Simply Beautiful

Slow motion makes everything better. That is a fact. This is so true that there is a YouTube channel dedicated to watching things happen in slow motion and these people are famously known as The Slow Mo Guys. Well the Slow Mo Guys most recent viral video shows what happens when you strap a compact disc (Kids, ask your parents what this is) to a vacuum cleaner motor and spin it at 23,000 RPM. 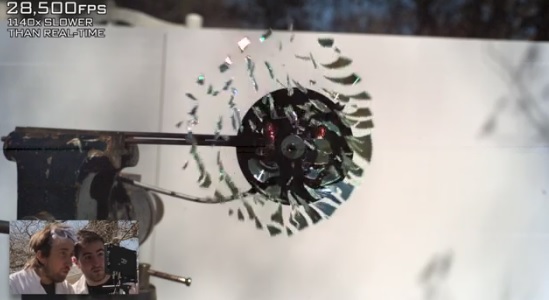 So what does happen when you spin a CD at 23,000 RPM? It disintegrates under the force which is awesome by itself, but is even more awesome in slow motion. The Slow Mo Guys were actually able to capture the process at 170,000 FPS (the slowest video they’ve ever done) and man is it cool.

When viewed at normal speed the CD appears to simply disappear in the blink of an eye but in slow motion the explosion looks like the grand finale of a fireworks demonstration. You can almost here the finale of Tchaikovsky’s 1812 Overture in your head as you watch the magnificence. Check out the video below and, if you like it, head on over to YouTube and check out all the other awesome stuff the Slow Mo Guys have on their channel.