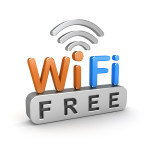 Public WiFi to some seems like it should be a basic human right, like air, water, or the ability to eat as many Oreos as I want, especially if the Oreos are mine, or  more to the point.. if the WiFi is mine! Unfortunately, until now, public WiFi wasn’t an option everywhere even if you were bringing it with you. To make it worse, I’m sure many of you have felt jipped when paying for WiFi, usually at an airport or, more likely, at a convention or conference center. Well, I am here to tell you that the days of feeling jipped, or overcharged, for WiFi are over!

The Federal Communications Commission (FCC) is cracking the whip on companies that block you from using anything other than their ridiculously overpriced WiFi. In addition to that, the FCC recently hit a company with a staggering $750,000 fine for blocking WiFi hotspots at convention centers.

The company, known as Smart City Holdings, was founded in the basement of the Houston Astrodome and provides telecom services to convention centers all over the United States. Smart City Holdings charges an $80 fee for a single day of WiFi access. To add insult to injury the FCC discovered that the company was using a WiFi monitoring system to block hotspots attendees were using to provide their own WiFi, like from their own smartphones.

According to the FCC’s Travis LeBlanc, “It is unacceptable for any company to charge consumers exorbitant fees to access the Internet while at the same time blocking them from using their own personal Wi-Fi hotspots to access the Internet. All companies who seek to use technologies that block FCC-approved Wi-Fi connections are on notice that such practices are patently unlawful.”

This $750,000 fine comes less than a year after the FCC did the same thing to Marriott for blocking guests’ WiFi hotspots. In addition to that, this order also continues the FCC’s newest passion of sticking it to the man and helping more people access the internet without getting blocked by those who want to make a few extra dollars just because you happen to be in their venue! Way to go FCC! Some rappers, artists, or big convention centers  might not like you, but people who love affordable WiFi sure do!

Sharing this story on social media? Use these hashtags! #FCC #WiFi #FreeWiFi