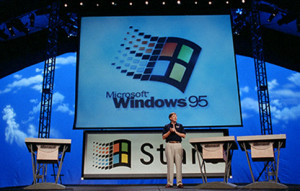 Microsoft Windows 95 is now 20 years old. With the decades old Microsoft operating system, Windows 10 is the most similar system. If you look past the fact that Windows 95 PCs required a 386DX processor, 4MB of RAM, and 55MB of free space, Windows 10 seems to have the most in common with Windows 95. Here are some examples of what I’m talking about.

Windows 95 was Microsoft’s first move to having an Internet-connected operating system. With Windows 10, Internet communications are involved within the operating system. By clicking the Start Menu, Live Tiles pop up that show you quick details on calendar appointments, new headlines, and weather. You can talk to Cortana from the taskbar and have her search the web for you, instead of opening a browser and searching the web yourself. Also, the OneDrive integration makes it easy for you to share files and, my favorite feature, the built-in Xbox app that allows you to see what your gaming friends are doing.

Ignoring all the similarities between Windows 95 and Windows 10, the important question is, will Windows 10 be as important as Windows 95 was? Satya Nadella, Microsoft’s CEO, wants people to LOVE Windows and not just “put up” with it. Now that Windows 95 is 20 years old, hopefully, Windows 10 can fill the shoes left by Windows 95 and be what everyone really prefers to use.