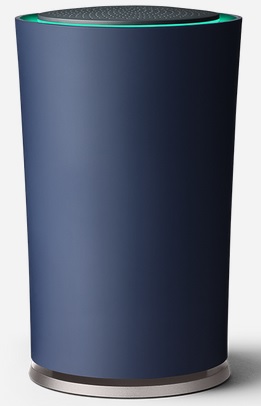 For years now Google has been trying to re-imagine our household products. From thermostats and TVs to smoke alarms and even speakers, Google has tried it all. Well, now it seems that the company is going to try and change another one of the things a lot of us use every day, WiFi routers. That’s right Google has seen your WiFi routers and thought, “Hey, we can do better than that!” and now they are going to try and capitalize on that thought.

Last week Google announced OnHub, a nice, new WiFi router that the company developed with TP-Link, a networking hardware company. The router, which will run you $200, is also meant to help control all of the other diverse devices you have connected to the internet in your home. The idea was simple: Most WiFi routers aren’t very attractive and come with a lot of frustrating cables and such that people tend to put them on the floor or in an area where they won’t be seen. Unfortunately, this causes the router to emit a much weaker signal, according to Google.

Because of this, Google hopes that the answer is making a better-looking device that people will actually want to keep out in the open. Google’s OnHub has subtle blinking lights and all of the antennas are stored inside the black, cylinder body. In addition to that, the router also displays the WiFi password. All you have to do is tap on it.

This new device is just another showing of Google’s ambitions for consumer homes. The SEO giant is hoping that it can be the go-to place for people, even when they are not on their computers or smartphones. Google wants to be the all-in-one platform that assists you in locking your doors, heating your home, or making coffee in the morning. However, Google already has competition in this field from companies like Apple, Samsung and even Amazon.

In terms of “smart homes”, all of the heavy lifting at Google comes from Nest, the device maker Google bought for a little over $3 billion in 2014. Nest, which makes thermostats, smoke detectors, and home security camera systems, was founded by Tony Fadell (a former Executive at Apple) who is considered the hardware guru in Silicon Valley. Fadell and Nest were not, however, responsible for working on OnHub, according to Google.

OnHub, like other Nest products, is controlled with an app for your smartphone and works on both Apple’s iPhone and Google’s own Android smartphone operating system. The router will receive software updates automatically and will also tell you how much bandwidth each of your devices is using. In addition to that, it will also allow you to prioritize one device for a faster connection, meaning you can prioritize bandwidth to your Xbox if you are playing online or to your laptop if you need to get some work done.

If you are looking for a new WiFi router, or you have a smart-house and think this is the one thing your house is missing, then you can pre-order OnHub now from a variety of websites, including Google’s online store, Amazon and even Walmart.com. OnHub will be available in retail stores in the United States and Canada in just a few weeks, according to Google.

Sharing this story on Social Media? Use these hashtags! #Google #OnHub #SmartHomes #WiFi