Create Your Own Raspberry Pi Tablet With Official Touchscreen 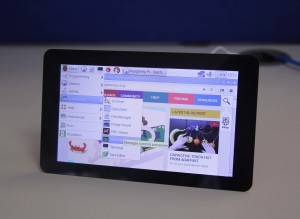 Have you ever wanted to build a basic tablet or control panel? Well, now you can thanks to the fact that the Raspberry Pi mini-computer  has been given an official 7″ touchscreen. The touchscreen comes from element14, the same British company behind Raspberry Pi. The micro-computer has been designed to connect into other components in order to custom-build almost anything, like computers, media servers, and even smart home devices. Raspberry Pi is marketed towards both enthusiasts and those new to building computers and equipment and is also capable of helping kids learn about things like coding and hardware.

The Raspberry Pi can be attached to the back of the touchscreen in order to create a basic tablet while both devices run off of one USB power source. The touchscreen itself measures 194 x 110 x 20mm and only has an 800×480 pixel resolution, which means it’s probably best suited for displaying controls then actually displaying any content. If you want to use the Raspberry Pi for content then your best bet is hooking it up to a TV or monitor via the built-in HDMI connection. Considering the fact that the touchscreen doesn’t take up the HDMI port, you could also have a low-resolution controller for your screen and a high-resolution display running simultaneously.

This new touchscreen will be integrated into the latest Raspbian operating system and will also work without the need for a keyboard or mouse. In addition to that, it also supports 10-finger touch and has an onscreen keyboard. The educational software in the Pi’s system is already capable of reading touch input though you can also develop your own apps and devices for reading touch if you so desire.

The touchscreen will cost you £42 in the UK ($60 US) plus local taxes and shipping for US customers. There has yet to be any word from the element14 camp of an Australian release date though the price converts to about $90 AU. The touchscreen is on sale from Farnell element14 and CPC in the UK and Europe or from Swag Store, RS Components/Allied Electronics, and Premier Farnell/Newark in North America.