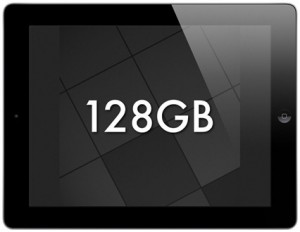 Apple has just announced its newest product targeted towards consumers with the debut of a new iPad. Don’t get your hopes up though. This isn’t the iPad 3, it is merely a fourth-generation iPad that has literally all the same features of the previous version of the tablet with the minor change of increasing the storage space to 128GB.

Yeah, that’s right, Apple has released yet another attempt at trying to suck more of your hard earned money out of your hands. Oh, I almost forgot the best part, the device only costs $800. Well, $799 to be exact, unless you get the cellular versions being launched on mobile carriers Verizon and Sprint. That model will only cost you $929 when it launches on February 5.

Both Verizon and Sprint, who are carriers of the other versions of Apple’s iPad, have confirmed that they will carry this “new” iPad. The only carrier that didn’t confirm was AT&T. This updated iPad represents a severely minor update to a device that was already slightly modified late last year. A lot of people are expecting Apple to reveal a more significantly changed iPad in the coming months, but I highly doubt it will be worth it.

Like I mentioned before, this new version of the iPad has all the same features of the previous version, including a 9.7″ Retina Display, a FaceTime HD camera and an A6X processor. According to Apple, the company is expecting this version of the tablet to be better suited for use in the business world, especially considering the fact that Apple has made a definitive push to get into companies for professional use.

I honestly can’t see much of a reason for this new iPad aside from a ploy to suck more money from its  customers than it already has. There actually isn’t that much of a need (not one that I can see, that is) for an iPad of this size for a permanent solution. If you wanted to rent an iPad like this for temporary use then that is a different story, but buying one just doesn’t make sense. Bravo Apple, you have created yet another “new” product that isn’t new at all.