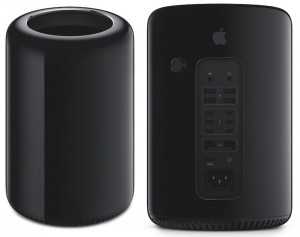 The Mac Pro is a new professional workstation with either four-core, six-core, eight-core or twelve-core Intel Xeon E5 processors, up to 64GB of ECC DDR3 RAM, dual AMD FirePro graphics chips with up to 6GB of dedicated memory, up to 1TB of PCIe-based solid state storage, six Thunderbolt 2 ports and support for 4K displays. This machine is a monster. The new look makes it a very pretty monster too.

The new Mac Pro features a beautiful cylindrical look. When the first pictures of it came out, you could only see the top. It looked more like a space ship than a computer. More pictures have surfaced since then, and you can see how beautiful it is all over. The tall black cylinder not only looks great, but it is much smaller than the last tower version that it is replacing. It fits into one-eighth of the space that the previous Mac Pro takes up.

Before sales tax, the Mac Pro starts at $2,999. The six-core model will run you $3,999 and if you want the maxed out twelve-core model, you should probably expect to drop about 10 grand. At the time of writing, it’s still not available for purchase on Apple’s Website (this is sure to change at some point today), but you should be able to walk into any Apple store and buy it.

Why the huge change? Apple never really felt the need to change the Mac Pro until now because it appealed to a small professional audience, but that audience was growing steadily. The professional world didn’t need a flashy iMac type of look, and it wasn’t required to reach a larger audience. But times are changing quickly, and the computer industry is getting further away from standard, bulky table top computers. Now we have laptops, all-in-ones, tablets, and even touch screen surface devices. Sleek is hot, and it’s been a while since the Mac Pro had a make-over. It only makes sense.

Does the business world need a more sleek and sophisticated look for even it’s computers? I don’t know, only time will tell. But why not? Your equipment is an extension of your companies style and professionalism. And this machine doesn’t just look good, it is a true work horse.

Does your business have a short term need for a Mac Pro rental? Click here to learn more about Rentacomputer.com’s Mac Pro rentals or call 800-736-8772 and get the process started today!